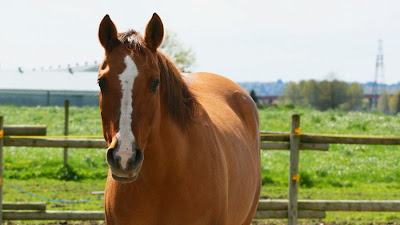 For the past six months I've been riding Marmalade, my Marm, Marmy, Marmy Mare. I am very lucky to have a great friend who was kind enough to lend me her horse and willing to trust me while, through trial and error, I endeavored to make her "right". Marm is a classic example of a "sound" horse that just isn't physically right. I would say a good half or more of horsemen out there would get on and just ride this mare. She is broke, sane, and is overall a good using horse that just about anyone can ride. Her "issues" if you can even call them that, are little things like an unwillingness to stop (though she will stop) and a desire to trot off (though she will walk), an uncomfortable gait and a rigid, stiffly muscled poll/neck. She is an absolute sweetheart but she always has this Eor like expression. She has always had an even stride but too me it looked shorter than it aught to be considering her conformation. All little things. But all those little things added up. I have become obsessed with making Marm right. So far I have worked on correcting her front foot shape and angles, getting her in to a better fitting saddle, having some chiropractic adjustments, putting her on a joint supplement and leaving her face/headset alone under saddle so she can learn to relax. She is better than she was. But I wish I could do so much more. I wish I could throw a lot more money at this mare but it hard to justify spending a bunch of money on a horse that is technically sound....technically usable as is. I cant help but wonder just how talented this awesome, big hearted mare could be if she were at her top physical condition. I hope time will tell.
Posted by Chelsi at 11:42 AM 3 comments:

The Value of a Broke Horse...

I have a good girlfriend with two very rambunctious teenage boys. I often ask her how she can stand watching them do the dangerous things that they do without having a heart attack. Her response, "I don't look". So far the hardest part of raising my own filly has been letting her learn to look after herself. Sometimes that means "I don't look". I believe in setting a horse up for success by taking baby steps through new situations... But, it just isn't possible to baby step through every learning curve. Some of them you have to run through with breath held and fingers crossed. It is tempting to avoid those situations but I cant keep Hola bubble wrapped forever. She has to learn stay away from the boss horse or she will spend her life standing alone in a paddock. She has to learn that having a meltdown along the fence line isn't going to get herself turned-in any sooner or she will be the horse that runs through a fence when you take her buddy away. She has to learn to learn that hauling isn't always slow back roads on sunny days, being passed by a semi on a highway in the rain sucks, (for her and for me)  but we will survive, hopefully. She has to learn that pulling back wont get her anywhere or she will be that horse that wont tie. It is really hard to not look. To not help. To not avoid the scary situation. And I don't expect her to come away unscathed. She has fallen down while running the fence line. She has got herself snubbed up while tied and panicked and pulled back. The knot held, thank god, and she only pulled for a second, thank god, and then she remembered to come off of pressure, thank god, and she stepped forward, thank god.

Raising'em up yourself isn't for patsies. What I've learned more than anything else is...

The tremendous value of a horse that is already dead broke, solid minded and been-there-done-that. There is a whole shit load of "thank god" moments that lead to that creation of that horse. A whole lot of hard work and a little luck too. 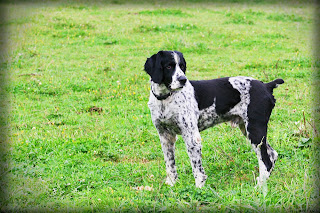 He is a good dog.
His family, my friends, are truly wonderful people.
Great friends, beautiful horses and good dogs-
I am blessed.﻿
﻿
Posted by Chelsi at 11:26 PM No comments:

Hola- Getting Older but Not Growing Up(ward)

I used to refer to my horses (all above 14.2HH) as "ponies". I'd say, "I'm going to feed the ponies"... "Going to ride my pony"... "I love my pony". I think I jinxed myself. I now have a two-year-old pony. Pony... as in a horse under the height of 14.2HH. Hola is tiny. Teeny tiny. 13.3HH and very fine boned 700 pounds. The vet said she would make a great anatomy horse as you can see and feel every bone and tendon. I was really holding out hope that she would be one of those late bloomers you hear about. I told myself I wasn't going to worry. But I was worried. So I did some more looking in to her pedigree...

Abby, Hola's mom is 14.2HH but a brick shithouse of big bone and muscle. JJ, her sire, is 14.2HH and finer boned but still a solid enough 900 pounds. I understand her being small but this small?

Abby is an own daughter of Rooster (Gallo Del Cielo) who is the #5 All Time producer (in $$ earned) of Reining Horses. Him, and his full brothers Grays Starlight and Paddy's Irish Whiskey (both top 20 all time producers of cutting and reined cow horses) are all built like Abby- short but by no means small. On the bottom side of Abby's pedigree is an AQHA world champion cutting horse named Rosie O Llama by Freckles Playboy (15.1HH)  (x Doc O'Lena)... now Doc O'Lena was a small horses so maybe that could be it? Below that is another cutting champion named Shorty Lena... Shorty? Ahh-Huh! You think it would be easy to find out how tall a horse named Shorty Lena is but no such luck... But, he is also Doc O'Lena bred so... could be but looking at the photos none of these horses looked particularly small.

Finally, I looked at Hola's topside. Her sire, JJ I have seen in person so I know he is not at all small. But what about his sire Topsail Whiz...

Topsail Whiz is the #1 all time producer of reining horses. I watched a video that shows him walking out of the barn with his owner. I also was able to see a handful of his top earning sons in the show pen. I took special notice of just how those saddle pads were fitting and how far the riders feet were hanging below the belly. These horses are little... really little... Turns out Topsail Whiz was only 14.1HH. Teeny Tiny... But they rein. They rein so freakin good that Topsail Whiz's get have earned over 8 million dollars and a large percentage of horses winning in the NRHA today are carrying his blood.


So I am no longer worried about Hola's size. She just happens to look a hell of a lot like her grandsire Topsail Whiz in size, color, conformation and- hopefully- athletic ability. I guess my PONY is about as big as she needs to be.