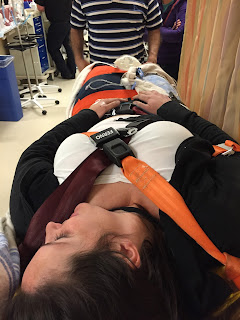 Do you know that withholding use of "the facilities" is a commonly used interrogation technique? Well, I was strapped to a board in a hospital ER waiting for an MRI, high on morphine and still in considerable pain when my bladder softly said, "Um... hate to bother you now but we've got a situation here."  Over the next while that persistent whisper turned in to a scream as I stubbornly attempted to "hold it" but of course I eventually reached my limit and I had my Mom go and get the nurse. When they told me the would have to put in a catheter I think I seriously mentioned that I would prefer to just pee my pants instead but I guess that is frowned upon because they proceeded with the catheter as if I hadnt said anything at all. I wont talk about what followed because it isnt polite and because I cant do so without copious amount of f-bombs however I will say that they had trouble with what should have been a couple minute procedure because I was spazzeming and shaking and in so much pain I couldn't hold still, To add insult to injury they had to cut off my favorite (and still like-new) Q-baby jeans. They tried giving me more morphine to cut the pain but that just made me feel more out of control and shaky. I remember thinking that I just had to get through this short burst of pain and then I would finally have some tiny bit of relief.. What I didnt know was that it is not uncommon, with this type of injury, for your bladder to seize (the muscles wont relax). I hate to speak so much about something so indelicate but my bladder played a supporting role in the drama of that evening... hell, at times it was the leading lady! I didnt cry. Not once. But I did beg and plead for mercy during that particular scene and the relief I so desperately sought was not to be. FY- In the future, I am going to pee my pants and claim it was an accident.

Ten minutes of so later I was called in for the MRI. I was still shaking violently. I had to go alone in to the MRI room and I kept trying to talk myself calm, mentally working from my toes upward relaxing each muscle and counting my breaths in, hold and out but nothing worked. The tech said that she had inserted a contrasting dye for the MRI and that I would feel a warming sensation through my abdomen that might make me feel like I had to pee. Ha! Awesome. But actually that warmth felt really good and calmed me some but by the time I rolled back to my room I was once again shaking so hard I was hurting myself. My Mom got a hold of a few warm blankets and I swear nothing has ever felt so good. The violent shakes stopped but I was still vibrating. I told my Mom that I thought it was from the morphine and she said no, that it was just the shock.
"Really?" I asked.
"Yes, it isnt the morphine. Your adrenaline is just coming down." my mom said.
For some weird reason, knowing that I was in control of my body and that I wasnt reacting to a drug made me feel like I had some control back. Within a minute of learning that I was in control of that shaking I had stopped. The mind is incredibly powerful. Either that or I really am a terrible control freak. The MRI results would later show that my bladder was actually distended. Over the next two hours I would release an entire litre (quart)! I felt oddly vindicated. Like "See! I really did have to pee!"

What the MRI also showed was that I had broken four transverse processes (the wings of the vertebrae) but thankfully there was no damage to any internal organs. The doctor explained that I could expect the next few weeks to be extremely painful and that they would give me as strong of painkillers as I required but that I could still expect significant discomfort. The plus side was that after a few weeks of a high level of pain I would likely start experiencing relief quickly. This is because the bones that I broke are deeply embedded in muscle and those muscles support the spine (contract and expand) every time you move. So the two bones that I broke off would have a sharp edges and two that broke but that were not displaced (broken off) would be moving against each other but once the sharp edges had been grown over with new smooth bone and once the breaks set up I would get a lot relief. It would just take time for my body to get that job done. I listened to all of this with half an ear. It all seemed like unimportant details. All I needed to know was that I was going to be okay. I should have remembered... life is in the details.

The greatest shock of the evening was when the Dr. gave me instructions for what I should be doing at home that evening.
"This evening?" My Mom and DB said in unison, shock in their voices.
"This injury is stable. The displaced bone are in good positions and movement will not pose any risk, in fact she needs to move in order to help the muscles loosen."
I think we all just stared at him, totally unable to fathom how in a few minutes I had gone from being strapped to a board (for five-ish hours) and told to not move (and having to get a FUCKING catheter) to suddenly being told to get up and drive home.
The Canadian health care system is a wonderful thing but at times like those, when they need to free up a bed because the hospital is overcrowded and understaffed, it really sucks. Sure I would be "stable" at home... but first I had to get there!

The next half an hour or so I would not call my proudest moments. I was pissed. To move an inch was excruciating. I was on a large amount of IV morphine and I couldn't move without feeling as though someone was stabbing me deep in the back with a red hot knife. Literally. Two nurses came in and tried to assist me with getting up. Rather than feeling like I was being assisted, I felt as though I was being hustled out the door. They tried pulling me up without explaining what they were doing. I growled at them to please stop touching me. I actually said please at the end of that really rude sentence (true to myy Canadian blood). I have a lot of friends and family who are nurses so no one has to explain the shit and abuse that job entails but at that moment I was going to scream if someone touched me again and I felt no empathy coming from those two. When I get hurt I get mad. And I was livid in that moment.  Both nurses stepped back, mildly offended. I tried to explain, as calmly and politely as possible that if they would kindly leave I would get up on my own (my Mom and DB were till present.) I kept thinking, "You guys want me out of here, fine! I'll leave. But dont fucking touch  me while I go."  Both nurses left and I told Mom and DB that I would get off the bed on my own but to please not touch me. I felt like a five-year-old having a tantrum but couldn't control myself. Eventually, I got off the bed. And with the encouraging words and support of my Mom and DB I was able to make it to the car and home and in to the house. A personal victory. Or just stubborn grit. Either way I thought I had made it through the worst. I hadn't.

*please know I that I am writing out this story because I have found it very cathartic to get the words down and out of me. Publishing it is only a way of
keeping it amongst the rest of my many adventures* Safe riding!