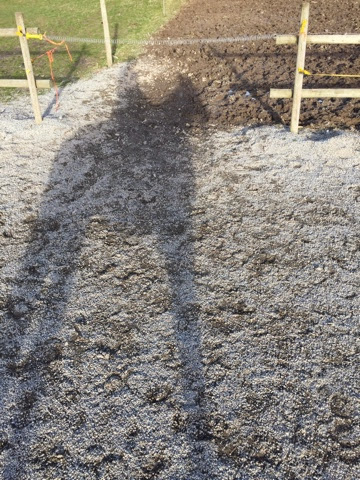 Yeah okay so maybe trotting yesterday wasn't the best idea. Hola stands at just 14HH, however, yesterday, I can pretty confidently say her back was sitting at about 14.3HH. She was one pissed off little filly. I figured I could either get off and put her to work (the pussy option) or I could give her supreme shit and then carry on like she had been a perfect angel the whole time (the cowgirl up option). Being that there were no men standing in the peanut gallery, the pussy option sounded pretty tempting. But I had myself to answer to so i took option two and bent her around and asked her to disengage her hip, pushed her off and then did the same the other way. I yelled at her to "quuuuuuit it!" And then forced myself to go all soft and calm and asked her to walk on. For a few steps she still felt ready to  cause trouble but then she took a deep breath, relaxed her back and walked forward calmly. We circled some pylons and I bent her to a stop (softly) both ways. I then sat quietly on her for a few minutes before working on having her give vertically and laterally. I even got her to back up a step. All in all it was a great ride, about 15 minutes long. I took a pic of our shadow. I have taken photos of the shadow cast by my horses and me for as long as I can remember. I was kind of excited to get the first of me on Hola.
Posted by Chelsi at 12:38 AM 1 comment:

On Tuesday I got on Hola for about five minutes. Such a short ride and yet we made a significant step forward... "forward" being the operative word. I introduced Hola to the crop before getting on to make sure she wasn't started by it's appearance. Ha! To Hola, that stick meant absolutely nothing except for maybe the mild amusement of having something new to smell. I wiggled it around some and then scratched her body with it but she really could care less. I say this because I really don't think that the crop was what made a difference when I got on as she didn't know what it could do and she didn't care that I had it in my hand (had no association with it). So I got on her and asked her to walk on. And she WALKED ON.  Hola has been walking but she has lacked forward motion because she constantly feels like she is still trying to figure out how to balance my weight, she just doesn't stride out. But from the minute she stepped away from the step stool she really just moved out like I wasn't even up on her back. I did disengaged her hip to stop first right then left and guided her left and right a time or two and then had her walk out for maybe a minute more. I did tap the saddle gently with the crop a few times when I asked her to go forward again but more to just get her used to the idea of that crop. My goal for the day had been met in the first minute of the ride so I decided to quit and drop her saddle off in the middle of the arena.

On Thursday I accidently got Hola a little rattled before getting on. I was waiting for a friend to come out to the barn so that I could ride (I still am not comfortable getting on when no one is outside) so I started up with Monster but I guess I was in a hurry and I didn't give her enough time to get used the idea before winging under the lead. That horse jumped from spot to another, about ten feet away, in the blink of an eye. "Why am I getting on this creature?", I thought. But before I could get her in a more relaxed state of mind my friend J came out and I needed to get started (I told him I needed ten minutes of his time, max). So I hop on. And Hola walks off with more energy than even the day before. But she dropped her head a little and kind of said "Okay, this I am cool with". I had set up some cones to give me something to focus on in my turns which really helped. She guides really lightly (even though she stalls sometimes mid turn). About three minutes in to my ride another man (a friends husband) came out to the barn. His presence, combined with that of the young man watching me gave me this sudden surge of bravado! Weaving between some pylons didnt seem too impressive. I needed to show these boys that I had some cojones! So I thought... let's see if I can push Hola up to a trot. So I did!.... for about a stride and half. Hola was really uncertain. She seemed to say "Ah... hell no! I cant trot with your fat ass up there!" but she tried so I let her quit. I asked again and she went three strides before quitting. She was a little pissy about it but she tried and didn't throw in any monkey business so I decided to quit while I was ahead.

Not bad. Not bad at all for our third ride back!
Posted by Chelsi at 10:36 AM No comments:

Yesterday I got on Hola for the first time in 2015!

In August of last year I put a solid 20 days of ground work on Hola and then in October I put 15 very short, very simple rides on her with my last ride being November 1st.

Last week I started up doing ground work with Hola again including sacking her out with the terrifying "MONSTER" (flag). After our ground work session yesterday I decided that she was in the perfect frame of  mind for her first ride back. I put on my helmet and stepped on her. She stood quietly and was completely unconcerned. She remembered how to guide left and guide right but as like in our last ride, she still lacks impulsion which I believe has to do with a lack of confidence in balancing my weight. I am going to have to start using a bat (very very lightly) to help her understand that when I ask her to move forward she needs to move out (the bat so that I dont have to wear out my "go" button before it is even installed) but I am hoping I might get ponied on her a few more times to help her gain confidence in moving out before we work on installing that "go" button.

Poor Hola. Someday she is going to get a real job and boy oh boy, will that ever be a slap of cruel reality.

On Tuesday I cut a piece of tarp from the bottom of a big grain tote and sewed it on to a dressage whip with baling twine. When I picked it up and gave it a shake the white flap of textile crinkled, crackled and twitched to life in my hand. In that moment, "MONSTER" was born. (MONSTER is fuckin' frightening his name can only by written in cap locks!!!)

On Wednesday Hola met MONSTER for the first time. The rest of the horses on the farm also got an eye full of the flapping, crackling, crinkling, waggling MONSTER and did their best River Dance impersonations at the far side of the field while carefully keeping both eyes on the offending flapper and shamelessly abandoning Hola to her sad but inevitable fate. Bastards.

On Thursday Monster made another appearance. This time Hola's friends quickly decided that they were safe enough at the far side of the fence and settled in for some afternoon entertainment. After twenty minutes of having MONSTER flap about like some demented pigeon Hola decided that animated bit of fabric may not, in fact, be attempting murder upon her person. Thus MONSTER became Monster. With this revelations the show became much less entertaining and the Peanut Gallery dispersed which allowed Miss Hola to focus on the task at hand. By the end of session two monster had impressed Hola with the notion that if she stands still and/or walks forward calmly, the flapping, waggling, crinkling monstrosity of a tarp will also become quiet. She looked at me as if to say, "Its like, magic! If I stop, it stops!"

On Saturday monster and Hola came to a truce of sorts. She allowed him to ride her back, touch her legs, and even (briefly) wiggle along her tummy. Like a shy young woman on a date with an aggressively persistent and overly feely man, Hola submitted unhappily to the contact. Tomorrow morning Hola will once again come up against monster but I believe that their relationship may have come to a timely end by Monday. Once Hola's fear has been overcome I will create a new Frankenstein to rouse the rebel in my sweet filly. Just call me Victor!
Posted by Chelsi at 12:24 AM No comments:

This year my goal is to be less sarcastic and less pessimistic...

Yah right, like I'm totally not going to screw that up right away.

Happy Happy Joy Joy in the New Year to each and every one of you.

Cut out all of the sugar I use in my tea.

On the Horse Front:

I want to cut on Abby.

And Hola is going to get broke broke. Not green broke. Broke broke.

The first option is affordable but scary as shit. This filly is so freakin fast footed I am guaranteed to get dumped on my ass at least once... or twice. Or god knows how many times.

The second option is actually the least affordable on a per hour basis and the longest time wise. A lesson will cost me $50+ an hour and I will only be able to take one or two a week.

The third option would be a no brainer if I had a trainer that really fit the bill... but I don't... and if I were prepared to spend $3000 on training, which I'm not.