A Different Kind of Rigging

I just had to share some pics and thoughts about the rigging on my friends saddle. L has had this Saddlesmith reiner for a few years now but I don't get to ride in it very often because the stirrups will not go nearly short enough for me. Damn you long legged women! I would kill to be the leggy type. This was the first saddle L bought for herself.. We saddle shopped together for a few months trying to find one that fit both her and the horse. Every time I had her sit in a saddle I would say, "How does it feel?" and she would say, "It feels like a saddle." I kept telling her that when she sits in one that fits just right, she would know what I was talking about. When she sat this Saddlesmith for the first time I didn't even get to pose the question, she looked at me, smiled and said, "Oh! Oh yah!" Luckily the stars aligned as they do so rarely when saddle shopping and the saddle fit both her horse and her budget. The only "hiccup" so to speak was that it had a unique style of rigging. When we first went to cinch it up I have to admit I didn't really have a clue how to rig it up. Right or wrong, since that day we have been doing it as seen in the photos and I have to say that I LOVE this rigging. It lies FLAT. No bulge at all under your leg and the buckle feels much more secure that with a straight rigging. I also think that the rigging helps keep the saddle centered on her back and helps disperse the pressure over a broader area. I guess other people don't love it like I do though because the saddle makers don't make this type of rigging. Martin makes an adjustable rigging that is also nice and can really help with saddle fit. What kind of rigging do you prefer? 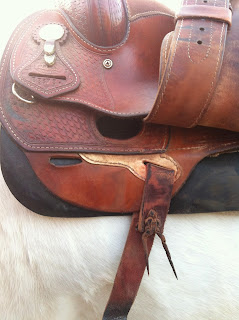 (please ignore that the pad isn't lined up right, I just threw it on to take pics) 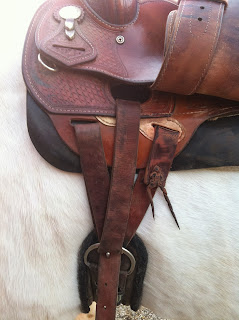 This evening I was talking to a friend about horses, training, and how we are perceived by others. Specifically, we discussed to what degree we care about how we are perceived by other horsemen. I would like to think I don't care. But I do. It would never expect someone to think of me as a really good horseman... but if one were to think of me as incompetent, now that would bother me very much indeed! What I discovered in admitting that truism is that my ultimate goal as a horseman is to be competent. To be able to get the job done. What is my self assigned job as a horseman? Catching the cow? Running a clean barrel pattern? Jumping the oxer? None of the above. My job is to have a horse that guides willfully. A horse that is soft and light, happy and relaxed; one who drives from behind and gives their face; a horse that lopes and jogs and stops hard and fast when asked; a horse whose body I can bend and flex and send in any which direction I please. My self assigned job as a horseman is to create a finely tuned partner. So why does it bother me so much to think that someone would perceive me as incompetent? Because I am. Because I can not and have not yet been able to create or maintain a horse that is all of the above.

So the next obvious train of thought would be, how do I become the horseman I want to be? Experience, time, lessons, clinics, DVDs. These things don't fall out of the sky. I have to invest in and further my education. The problem with that... I'll have to write about next time!
Posted by Chelsi at 10:47 PM 2 comments: 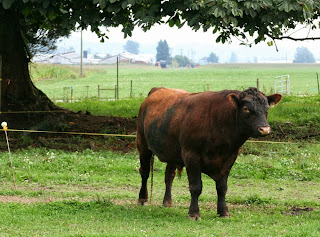 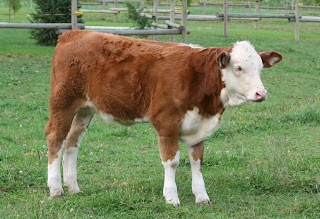 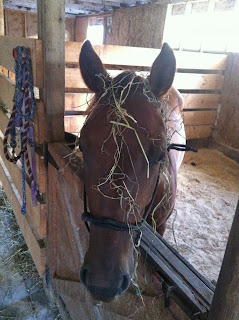