DB and I headed out later than planned. Just an hour in to our two hour trip we were heading West in to a quickly setting sun. Chasing daylight did nothing to soothe my frayed nerves or a belly sick with anticipation. We were headed to small town on the coast of Washington state. The trailer we were going to view as a 1987 Circle J straight haul, silver with a black stripe. At the price they were asking I could afford to strip the trailer down to bare bones and still come out ahead. The problem was, at the price they were asking I knew I had to buy outright tonight or it wouldn't it wouldn't be there in the morning. I had my ducks in a row, I had bought insurance and a new hitch, went to the bank for US cash and put together a package of our e-mail exchanges as well as a print out of the craigslist ad so that I could prove the trailers purchase price at the border. I had spent so much time trying to make sure that I would get the chance to see the trailer, that I could buy the trailer and that I could import the trailer that it wasnt until I was in the truck and halfway there that I realized I hadn't actually stopped to consider if I wanted the trailer. I also realized that I hadn't seen a picture of the left side or backend and I hadn't really asked much about the damn thing either. DB was going to kill me if we had driven all this way to see a piece of garbage. What had I gotten myself in to?

The sky had turned a soft lilac by the time we pulled up to a small home set back in the woods. On the left of the drive was a pretty black and white Paint gelding, to the right, a sliver and black Circle J. Forgetting my manners, I jumped out and quickly circled the trailer. I looked back at DB. He cocked an eyebrow and asked, "Well?" I thought about playing it cool but there was no holding back the smile I felt blooming outward from deep in my heart. A huge smile and a quick nod and he knew I was sold.

The lady who answered the door was small and sharp bones with warm blue eyes. Her husband had a white beard and slow and easy way about him that was instantly endearing. We talked about the trailer, its history and I did a more thorough walk around. We filled out the paperwork by the light of the moon. I paid them cash. A small sum for the quality of the trailer. Afterward, we stood about talking. What we learned was that this kind man had lost his job last year. They were selling the trailer to help out with bills. Standing there in the cool evening air, listening to them speak positively of life changes, of putting in vegetable beds and downsizing to a smaller property, I learned something I hope I never forget. To indulge my thrifty Scottish nature by taking advantage of a depressed marketplace... well, that's one thing in theory... but to meet those nice folks and put a face to that economical reality, well that's something else entirely. Behind those "good deals" are people who are giving up what they worked hard to earn. That "deal" can come at a cost that should never be ignored or disrespected.  I had expressed to them how buying this trailer was a dream come true. She said that it had been for her too and wished me the best of luck with it. I could tell by her eyes she meant it. I could feel it in the warmth of her hug.

I hauled the trailer home that night comforted not by the fact that I had gotten a good deal but instead by the sincerity of their good will. I got my trailer. I will cherish it. But I think the life lesson that came with it was far more valuable
. 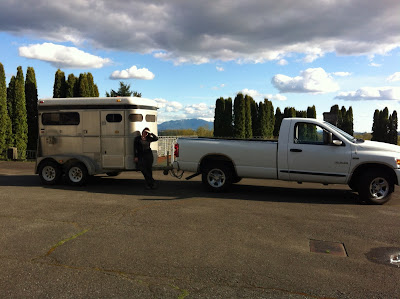