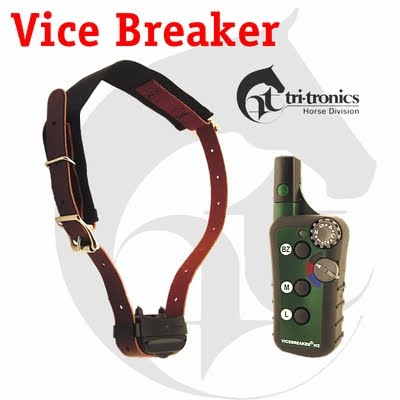 You heard me! An equine shock collar! Why do I feel like I'm the last one to hear of these things?

So this afternoon I am browsing through some e-bay items when I saw a link and a little picture that, at first blush, appeared to be a cribbing collar. Even the name, "Vice Breaker" didn't immediately draw my eye but just as I was about to skip on past I noticed what looked like a little remote control device in the picture. Curious, I hit the link and then stared in awe and wonder (I was gobsmacked!) at the larger picture before my eyes! Why, it wasn't a cribbing caller at all! The collar, with little box and prongs and a hand held remote clearly indicated a shock collar! I quickly scanned the ad for conformation but it seemed they very pointedly avoided using the word "shock" (using "correction", "stimulation levels", and "trainer" in it's place) however, sure enough, there towards the end a larger picture read, "SHOCKING- only in how effective it can be in stopping vices and bad habits" and shockingly, to me anyways, was that the product was endorsed by none other than Clinton Anderson.

I have to admit that I didn't quite know what to think. I googled the product and read some of the hoop-dee-law and there were some valid points to the argument for using a shock collar to correct self destructive or dangerous behavior. I found myself humming and hawing trying to decide if I really believe that a shock collar was in the best interest of the horse as they claimed (protecting the horse from itself or others). My first impression was that it was a "cheater" product designed to eliminate the kind of problems that only exist in the first place because of the stressful environments, demands and misuse we impose on our horses. For every argument I could come up with for the use of a shock collar I could find one to counter it.

For example, a cribber. We all know the safety issues not to mention costly damage created by a cribber. However, most of the time those behaviors are created by stress, confinement or boredom. Is it our right to expect that every horse should stand in a stall happily or at least uncomplaining? Should we prevent him from venting his frustration or boredom? I'm not suggesting that you should let a horse crib but I am suggesting that maybe a horse should be removed from a stall if he is beginning to crib. Note my use of the word "beginning". I have known many horses that have continued to crib long after they were removed from the environment that started them on that path (my understanding is that they become addicted to the endorphins that are released during the cribbing action.) So what then? I guess using a shock collar to create a negative response to the behavior might be, at that point, justified?

The gray area of any such device or negative correction is where I find the biggest cause for concern. There are plenty of credible reasons to use negative correction (something that creates discomfort or pain) but I think that too often when we correct the behavior rather than the underlying problem and in doing so we just divert that problem elsewhere- like bopping the gopher head at a fair, it'll just pop up another hole. My concern with the idea of using this collar stems not from all the ways in which it could be effectively, safely and humanely used but in all the ways it could punish the horse for our own mistakes. For example, if my horse tries to nip me when I am cinching him I need to look to see that the saddle fits, there is no girth sores, pinched spots, that I am not over tightening the girth etc... if I used a shock collar to keep him from nipping me I'd probably just end up with a bucking horse instead!

Do I agree with the use of shock collars on horses? *shrugs shoulders* Maybe. Sometimes. Depends...

My real concern lies with the people behind the remote control. I've seen a person yield a stud chain and spurs in ways that hurt a horse ten times more than what any shock collar ever could. It's a little like the use and ownership of firearms... but we'll leave that for another day!
Posted by Chelsi at 4:27 PM