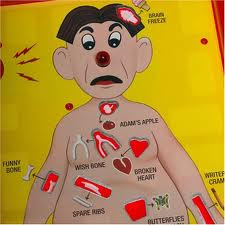 And I'm not talking about the game! My sweet man HS had an operation on Wednesday to repair a inguinal hernia in his hip (often called a sportsman hernia it is most likely from the time he spent running marathons). So for the past few days I've been playing nurse! I've told him that if he's a good boy I'll go rent that sexy little white frock (joking! I'd look freakin' ridiculous! *shudders at the thought*) But if he's not a good patient then he'll discover that Nurse Ratchet aint got nothin' on me! So far I've had to be a little bit of both:)

This kind of operation, we were told, causes very intense pain for a few days after the surgery (even with the "good stuff" pain medication) followed by a very quick recovery.... so, as hard as it has been in the past few days it is nice to know that he'll be on his feet soon. And that there is hope for a full nights sleep soon too... I'm tired. Veeeery tired. Three nights of barely any sleep and I'm done... which leads me to wonder... How, HOW on God's green Earth do you mothers with babies do it!?! For MONTHS!!! (or years) With other children and a household to look after!