I bought an English saddle today! Can you believe it! I told the lady at the store that it was my very first ever English saddle but then on the drive home I remembered that I actually did own one when I was fourteen or fifteen... Have you ever had this happen.... You can distinctly remember owning a specific item and yet you have no recollection of ever having parted with that item....but yet you also have absolutely noooo idea where or when you lost that item along the way? Nor have you ever even recognized that item was gone until years later? Well, I dont ever recall selling or giving away that saddle, or leaving it behind at some barn... And I dont recall having even wondered what happened to it in the past. But I know I dont have it now and havent in ten years or more. Weird.

Anyways, I bought a Wintec 500 all purpose saddle with easy change gullet and CAIR panels. I also went out and purchased a different size (wide) gullet because the (average) size that the saddle came with was much to narrow for my hardy mare. It was really cool how quickly (less than five minutes) it took to change out the gullet. The store had provided me with a measuring tool to help assess what size she would be needing and I have to say that it appears (at this point *knock on wood*) to be a good fit. The CAIR panels are neat too... rather than traditional flocking the panels have some kind of air pocket system that allows for a better fit and good distribution of the riders weight. While the saddle is synthetic and "cheaper" than I would EVER consider buying in a western saddle I have to say I've heard nothing but good things and have high hopes that it will work out well. 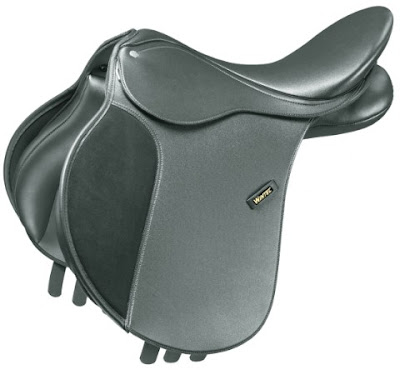 As for "Why English?" (as I've been asked a dozen times now). The answer is simple. My Bob's Custom Bob Avila Cow horse saddle does not fit Lil'P. I L.O.V.E. my saddle, it is soooo comfortable, so pretty and finely made. It is the fourth (?) Bob's I've owned and to be frank (at the risk of sounding like a snob) once you've gotten used to a certain quality of saddle it is hard to go back. For me to go out and replace my saddle would be no easy task... I'd have to fit her, fit me, my taste and my budget. I also would have to figure out what type of Western saddle to buy based on what direction I plan on heading with her (barrel, roping, reining, cutting etc.). So there are a whole lot of question marks involved in buying a new Western saddle and I just didnt have the heart for the task. 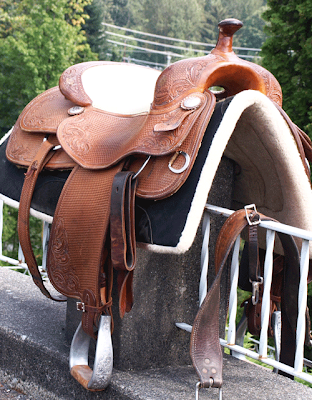 But I still needed a new saddle. That is when I discovered that, as particular as I am when it comes to Western saddles, I am totally oblivious and not at all particular when it comes to English saddles. While fitting my horse is still important I dont have to worry about type, make, style. etc. I could buy a synthetic and be blissfully ignorant and unaware of my folly (if any). So I did. And I am. *guileless stare*

The other HUGE factor (pardon the pun) is an issue of weight. My Bob's weighs 37 pounds. My heavy western pad weighs a few pounds too. This English saddle (I believe) weighs about 12 pounds. The pad weighs a few ounces. So, as best as I can figure I've cut around 25 pounds off my horses back. Twenty-five pounds is no small amount of weight. I would have prefer to have cut that poundage directly off my ass but I cant afford the sugery... or maybe I could have if I hadnt spent it all on horses:)

Which brings me to my next point. I would like to loose that 25 (or more) pounds through the help of diet and exercise... exercise such as riding.... such as posting a working trot in an English saddle for a half hour or so. Trust me, I nearly died during my lessons earlier in the year... I believe I even called my very lovely instructor a very bad word. I appolgized once I was recovered enough breath to speak. I also could barely walk the next day. This English saddle is going to work my ass out better than Jane Fonda in a neon blue belted jumper thong .. 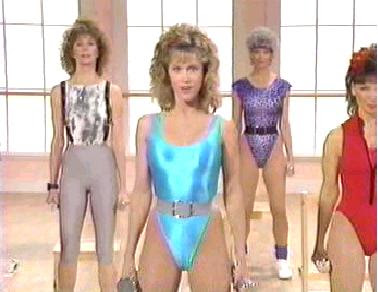