Princess and the Cold

When you look at the weather network and see the word "frigid" scribbled across the point on the map where you live.... jump in the car, drive to the nearest airport and get on the first flight to Hawaii, Mexico, Libia, anywhere where one can survive outside for more than twenty minutes without becoming a human Popsicle.

Last night the winds were gusting at 80-100kms (50-65 miles) an hour and the windchill was around -20C (-4F)... so... cold enough? Why yes it was! The problem with these cold fronts is that they come on suddenly and harshly. Last week it was a balmy 7-8C (50s F) and by the end of this week it should be back around 6C. The horses (and people) just don't have time to acclimatize.

So last night I stopped in to make sure LP was all tucked in snug and warm only to discover that she wasnt eating her feed as usual. She had eaten very little in the hour since she has been given her supper and when I offered her grain she showed no interest in it at all (which is VERY alarming for a horse that usually begs for it). She also had that distinct "funny" look that most horsemen learn to recognize yet that remains impossible to define. My instinct was that she was cold and that maybe her gut was clenched. When I put my hand under her blanket I didnt feel that usual pocket of warmth.... so... off I went home to grab hot water and a warm bran mash slurry. I threw a blanket in the dryer to get it warm before stuffing it in a garbage bag and heading out to the barn (at the suggestion of my trusty friend Barbie). By the time I got back she appeared a little less "funny" but still off so I threw the warm blanket on her and then a stall blanket on top of that. I then offered her the bran mash (which had a hefty dose of molasses in it)... to which she totally snubbed her nose. So I added some grain to it.... to no avail... so I added even more grain to it (wasnt going to let her eat it all but it would at least get her going) and she still wanted nothing to do with it. I shouldnt have been surprised... LP wouldnt eat carrots, apples, horse treats or anything besides grain when she first came. I tried warm apple juice with just a bit of grain in it but she wouldnt have that either. I gave up on feeding her something warm and instead dumped warm water in her water bucket...which she drank. I was there for about an hour total and by the time I was done fussy with her she had perked up and was eating with more vigor. I left the extra horse blanket on her overtop of her usual winter (usually it would go under but I didnt want to let out the warmth she had gained). LP will also be getting some extra grain until the weather turns to a more reasonable seasonable... the extra calories she can burn in to heat. 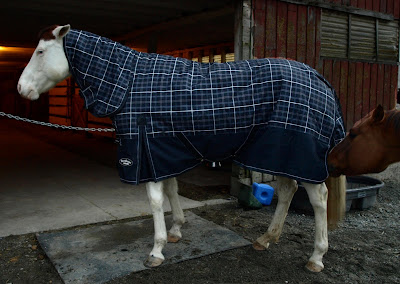 (P. in her jammies with neck guard up)

I think I am going to try to introduce small amounts of bran in to her diet and other such things so that if and when getting medication or a hot slurry on a cold night, it wont be such a big to-do.

While I was there I treated her mud fever (as I have been the past ten days or so). I am very pleased with how much of it has healed up. The treatment I went with was one really good removal of all the scabbies (after soaking them in mineral oil) and I clipped the hair on and around the effected areas. I then treated the area with a daily treatment of Hibitane ointment and some zinc cream on really wet days. She was kept in a dry paddock for a week to give it a head start against the wet fields. This spell of cold weather should help things along so I hope *fingers crossed* that it will be completely gone within another week. Her cough is completely gone now (after having her hay wet down and fed on the ground) but we'll have to wait and see if it gets stirred up again when I get to riding her. The spot on her cheek has a good start to filling in with new hair growth, I treated it with the Hibitane ointment for a week and am now giving it a little dot of MTG. LP also had rain scald on her neck which is clearing up nicely after I treated it with MTG. 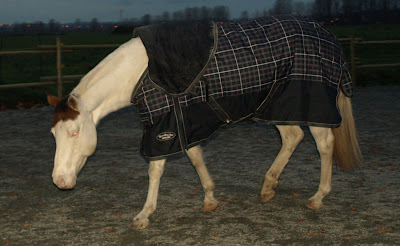 (LP with neck guard pulled back)

I was told before that when you blanket you take responsibility for making sure that horse is warm or cool because you take away some of their ability to create warmth for themselves (by reducing the amount of hair coat they have) and their ability to "puff" that hair up on colder days (the blanket makes the hair lie flat). I should have monitored LP earlier and thought ahead better as to how much blanketing she would need this week... I hope this time that lesson will stick... never assume that your horse is warm enough just because you have a winter blanket on. Always check to make sure that there is a pocket of warmth under the blanket (there wasnt last night when I checked P) and double blanket if need be.

If it's one thing I'll give LP, she sure has a way of keeping me on my toes!